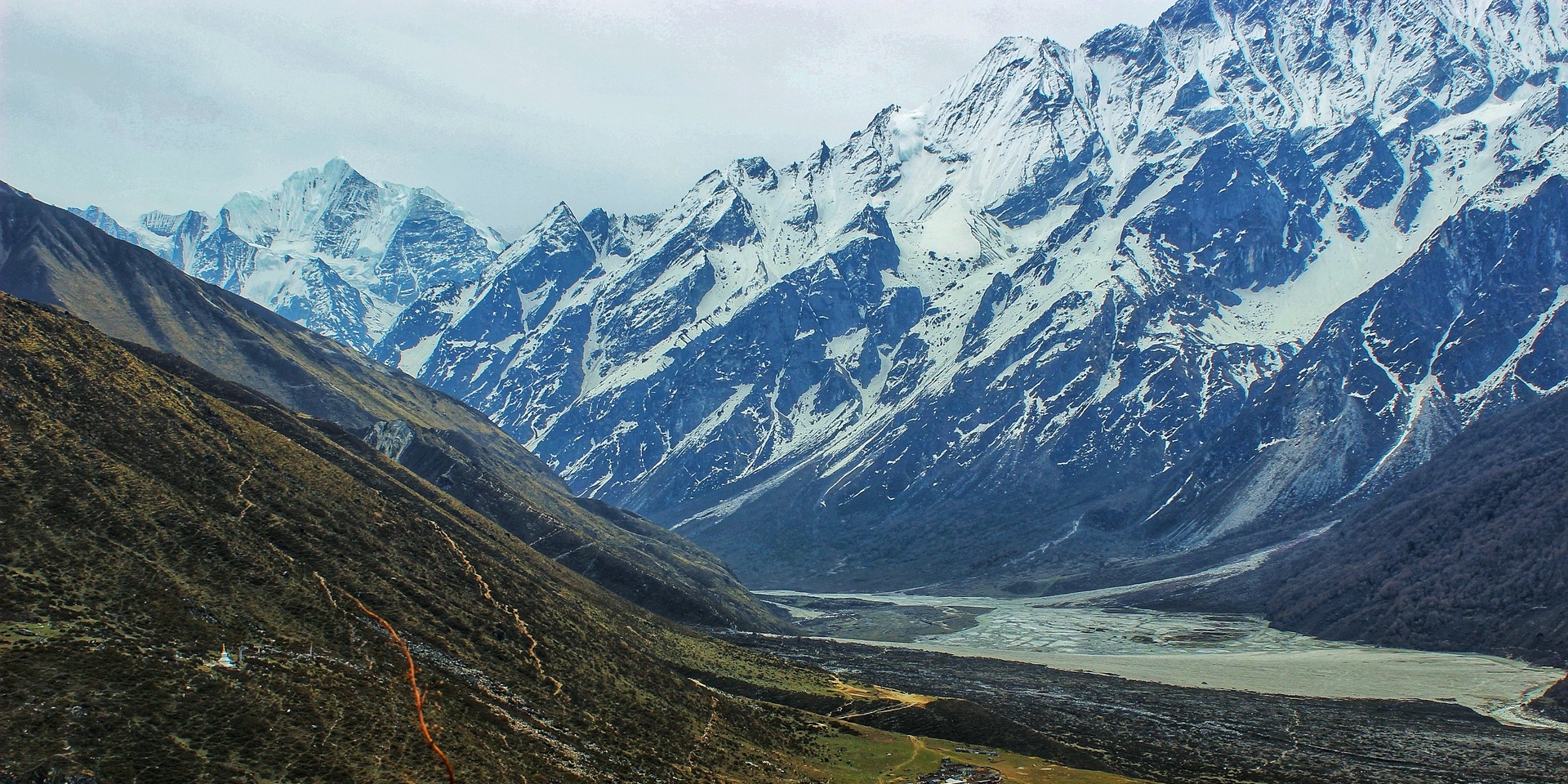 Enjoy a spiritual trek to Gosainkunda Lake situated at the sheer altitude of 4,380 meters in Langtang National Park. Thousands of Hindu and Buddhists make a pilgrimage to the lake every year. Explore the source of the massive Trishuli River along the trail and visit a few of the over 100 freshwater lakes around Gosainkunda.
Gosainkunda is home to 108 alpine freshwater lakes. Most of these lakes remain frozen half of the year. Witness the folk legend of the Hindu Deity Shiva, who pierced his trident into the mountains to extract water, hence creating the lakes. The scenic Langtang Gosainkunda Trek advances through the pristine Langtang National Park.
The scenic trek begins upon your arrival in Kathmandu. Embark on a joyous road journey along the massive Trishuli River and Bhote Koshi to Syabrubensi. Syabrubensi in Rasuwa District lies 122km northwest to Kathmandu City. Trace the usual trail and begin climbing through the traditional Tamang villages en route to Langtang. Located at the base of Langtang Lirung (7227m), Langtang village remains home to less than 400 inhabitants. A half-day hike brings you to the Sherpa village of Kyangin Gompa. Explore the ancient Kyangin Monastery and climb the local peak of Tserko Ri (4984m). After enjoying the majestic views from atop, you’ll retrace your path and trek back to Lama Hotel. A detour leads you east towards Gosainkunda via Lauri Binayak and Thulo Syabru villages. Spend a day exploring the pristine Gosainkunda Lake and a few of the surrounding lakes. The festival of Janai Purnima in August sees the highest inflow of pilgrims in the lake. Be prepared to get overwhelmed by the overcrowded trail during August. Leaving Gosainkunda, you’ll begin trekking downhill along Chandanbari to arrive at Dhunche. Embark on a jeep and ride back to Kathmandu.
Embark on an adventurous Langtang Gosainkunda Trek with Everest Extreme Adventure. We specialize in handpicked treks around Nepal. You can choose from our fixed groups or undertake a private trip with your close ones. Our full-board trek package covers entire transportation, accommodation, meals, an experienced guide, and porter.

After breakfast, embark on a scenic road journey along the Trishuli and Bhote Koshi Rivers to arrive at Syabrubensi. Syabru is a small town located at the foothills of Langtang in the Rasuwa District. The 122km long road journey is filled with beautiful scenery of the lush green hills, mountains, and quaint villages. Spend the evening strolling around Syabrubensi and observing the local lifestyle.

Enjoy your breakfast and then embark on the first day of the trek. A half-day trek along the massive Langtang Khola will take you to Lama Hotel. The trail leaves the Bhote Koshi River and begins rising through the beautiful rhododendron forests. Begin climbing the upstream trail beside the Langtang Khola. The trail ends at the traditional Tamang village of Lama Hotel. Overnight in Lama Hotel.

From Lama Hotel, you’ll embark on a half-day trek towards Langtang Valley. Located at the base of the mighty Langtang Lirung, Langtang valley is home to less than 400 inhabitants. The settlement was slowly destroyed during the earthquake of 2015. Leaving Lama Hotel, you’ll begin climbing through the dense pine forests of Langtang National Park. Enjoy a warm lunch at Ghodatabela before heading uphill towards Langtang Valley. The latter section of the trail goes past rocky terrain towards Langtang village. Catch the beautiful sights of Langtang Lirung, Tserko Ri, and Shisha Pangma peaks en route.

Wake up to the beautiful sight of Langtang Lirung. The day begins with a delicious breakfast. Afterward, you’ll embark on a trek towards Kyangin Gompa. The half-day trail goes through snow moraines and enters the wise Himalayan section. The Sherpa village of Kyangin is home to the ancient Kyangin Monastery. Enjoy the beautiful sights of Langtang Lirung Peak, Langshisha Ri, and Mt. Ganchenpo (6387m) from the village. Overnight in Kyangin Gompa.

Spend the day exploring the pristine Sherpa village. The day tour begins with a visit to Kyangin Gompa. The centuries-old monastery resembles Tibetan architecture. Make a short visit to the local cheese factory that produces Yak cheese and distributes it throughout the region. From here, you’ll embark on a short hike of Tserko Ri Peak (4984m). The small peak offers a panoramic view of the Langshisha Glacier and snow-capped mountains. Spend the night at Kyangin Gompa.

Retrace your path from Kyangin and begin trekking downhill through Langtang Valley towards Lama Hotel. The trek starts with a short downhill hike through snow moraines towards Langtang village. From here, you’ll take a downhill trail to reach Ghodatabela. Take a short break and enjoy your warm lunch before climbing down through lush pine forests towards Lama Hotel. The day-long trek can be a fatiguing experience. Spend the evening enjoying a warm Tibetan tea. Overnight in Lama Hotel.

Leaving Thulo Syabru, you’ll begin climbing the uphill trail. The scenic trail takes you along the Gosainkunda trail towards Lauri Binayak. As you start climbing up, you’ll leave the forested paths and encounter rocky terrain. This is a momentous day as you climb almost 1700 meters in altitude. Enjoy the majestic sight of the surrounding mountains en route to Lauri Binayak. Overnight in Lauri Binayak.

The trek materializes as you leave Lauri Binayak and begin climbing towards Gosainkunda Lake. The trail climbs along the narrow ridges overlooking the majestic sights of Manaslu, Ganesh Himal, and Langtang range. The trek concedes upon your arrival at Gosainkunda Lake. You will catch the view of other lakes surrounding the area. Gosainkunda Lake is the largest among the 108 lakes in the region. Spend the day exploring the pristine Gosainkunda Lake.

Spend the day exploring the beautiful Gosainkunda Lake and hike towards the nearby lakes of Saraswati Kunda and Bhairab Kunda. Adjoining the lake lays a temple of Lord Shiva. Make a short hike to the hill to enjoy the panoramic view of the lakes. The folk legend suggests that when Lord Shiva pierced his holy trident into the mountains to bring out the water, it created different lakes. Every year, thousands of pilgrims and tourists visit the lake on the special occasion of Janai Purnima. Spend the rest of the day roaming around the religious site and observing the local lifestyle. Overnight at Gosainkunda.

On the last day of the trek, you’ll leave Chandanbari and begin trekking downhill along the beautiful terraced farmlands. Visit the local Cheese factory along the way. About 3hr into the trek, you’ll arrive at Dhunche village. The large town remains the headquarters of the Rasuwa District. From Dhunche, you’ll embark on a bus and begin driving towards Kathmandu. Enjoy a scenic drive along the Trishuli River towards Kathmandu. In the evening, we’ll treat you with a delicious farewell dinner.

On the last day in Kathmandu, you’ll bid adieu to the beautiful city and make your way towards the airport. We’ll drop you off two hours before you the time of your flight. In the meantime, you can indulge in shopping at Thamel.