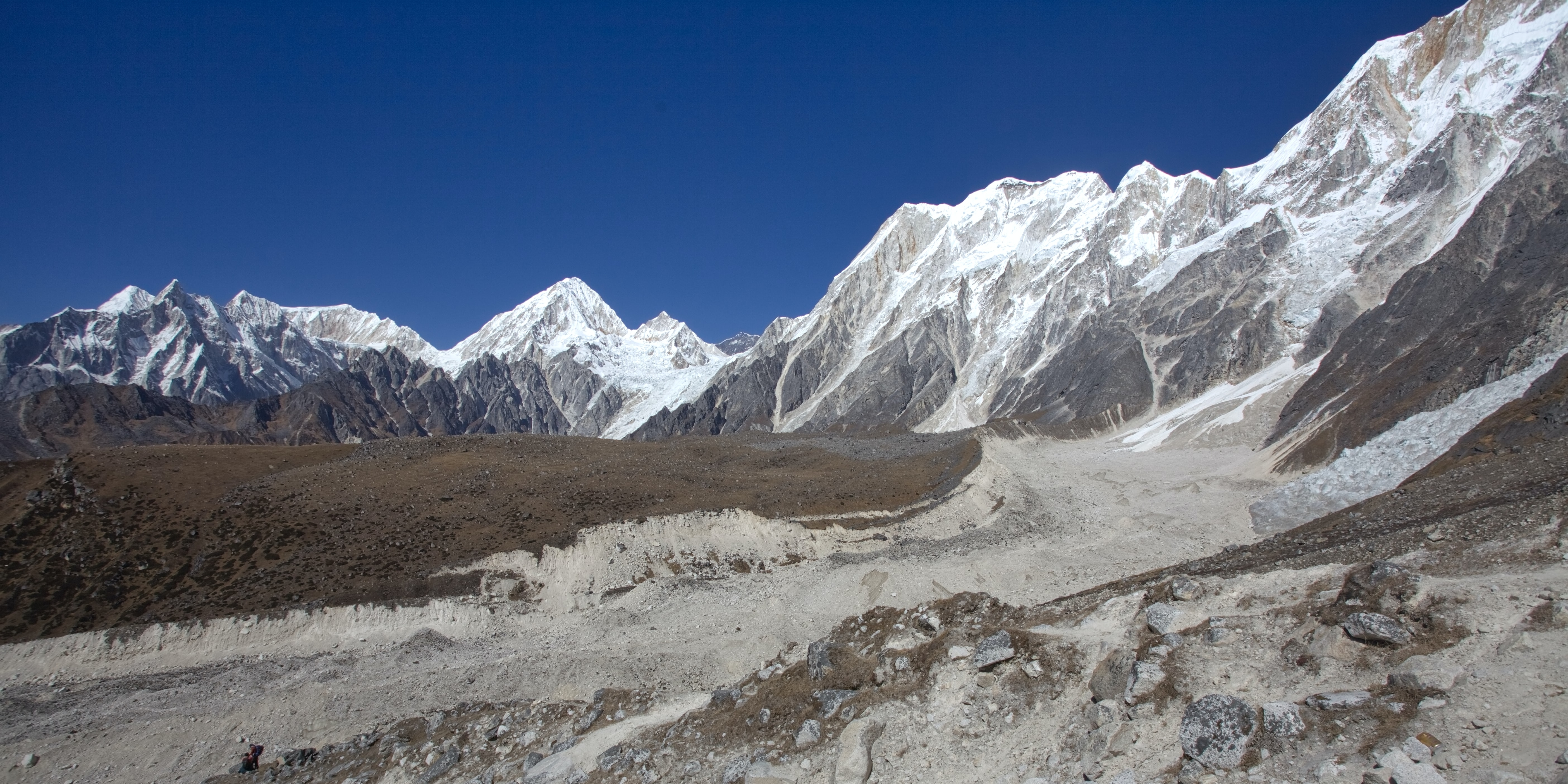 Enjoy a teahouse trek along the foothills of the eighth highest peak in the world. Manaslu Round Trek encircles the entire Mt. Manaslu (8163m) and explores the ancient Nepal-Tibet salt-trading route. Trek along the beautiful Budi Gandaki River through one of the remotest Himalayan regions –Manaslu Conservation Area.
Manaslu Round Trek or Manaslu Circuit spans almost 144 kilometers. It begins from the historical Gorkha District and goes through Manaslu Conservation Area into Annapurna Conservation Area (ACAP). Named after a Sanskrit word “Manasa” which stands for “soul,” Manaslu is regarded as a revered peak by both Hindu and Buddhist adherents. Witness the unique lifestyle and culture of the endemic Nubri and Tsum tribes in the Manaslu region. A few of the other ethnic tribes you will witness are Gurung, Bhotias, and Sherpa tribes. One must get permits for both Manaslu Conservation Area and ACAP during this trek.
The 16-days trek begins with a scenic road journey from Kathmandu to Sotikhola in Gorkha District. Drive 140km northwest of Kathmandu along the beautiful Trishuli River and Budi Gandaki River towards the foothills of Manaslu Peak. The pristine trek goes past the beautiful multi-ethnic villages, lush forested hills, and glaciated path towards Manaslu Base Camp (4460m). Follow the massive Budi Gandaki River along the way and stay in the comfortable teahouses inside the vibrant cultural villages. Witness the unique culture, lifestyle, and occupations of the native Gurung, Bhotias, Sherpa, and Tsum tribes. You may find a strong influence of Tibetan-Buddhism among the inhabitants in the higher regions.
After witnessing the ancient salt-trading route of Budi Gandaki River, you’ll make a detour to the west and begin climbing Larkya La Pass (5,160m). Cross the highest mountain pass in the region to make your way towards Annapurna Conservation Area (ACAP). Begin trekking along with the beautiful Gurung and Magar villages and head down to Dharapani. Be mesmerized by the majestic sights of snow-capped peaks of Himalchuli (7893m), Ganesh Himal (7422m), Annapurna massif, and Manaslu along the way.
Everest Extreme Adventure specializes in handpicked treks around Nepal. Our package includes transportation, lodging, three meals a day, an experienced guide, porter, and permits.

Manaslu Round Trek begins with your arrival in Kathmandu. We have booked the most exquisite room for you at one of the best Three Star Hotels in Kathmandu. Our representative will drive you from the airport to the hotel and will bring you to our office where we can discuss the trek in detail. You will also meet your trek guide and exchange the necessary documents. You can visit the local trek shop to buy or rent any required trekking gear or equipment. Overnight in Kathmandu.

Today is a trek preparation day. Your trek guide will assess your trek gear and equipment. You can pack the necessary items in the duffle bag and add only light items in your backpack. In the meantime, your guide will visit the appropriate governmental offices to get trek permits and national park entry permits. You can spend the day exploring the beautiful Kathmandu City. Indulge in a half-day sightseeing tour with an experienced tour guide. He will take you to some of the famous and most visited UNESCO World Heritage Sites such as Swayambhunath, Kathmandu Durbar Square, and Pashupatinath Temple. The well-guided tour offers insights and facts about all these UNESCO designated sites. Overnight in Kathmandu.

The trek begins with a scenic drive to Sotikhola village. Embark on a bus and drive almost 9hr along the beautiful Trishuli River and Budi Gandaki River towards Sotikhola in Gorkha District. Enjoy the scenic sights of the colorful villages, lush forested hills, and majestic mountains along the way. Once at Arughat, you’ll get off the bus and catch a local jeep that will drive you towards Sotikhola. The entire journey spans 140km in the distance. Enjoy the local scene at Sotikhola in the evening before resting for the night.

The trek begins at Sotikhola village and climbs towards Machha Khola that lies almost 15km away. The uphill trail climbs nearly 200 meters in altitude and crosses small Gurung settlements along the way.

Continue walking along the 100m tall waterfall and head towards Machha Khola. The trail suffered devastation by the massive earthquake of 2015. It has recuperated and has developed to its original form today — overnight in Machha Khola.

Leaving Machha Khola, you will begin trekking along the massive Budi Gandaki River towards Tatopani village. Climb a steep uphill trail towards Tatopani that is home to a natural hot spring. You can consider taking a dip in the hot spring to relax your aching muscles and joints.

Afterward, you’ll continue climbing up towards Yaru Bagar and cross a 158m long bridge to arrive at Jagat village. You will cover almost 22km in the distance and walk about 5hr. Jagat serves as the gateway to the Manaslu Conservation area. Here, the officials will check your national park permit. Overnight in Jagat.

After breakfast, you will continue walking along the Budi Gandaki River and climb 480 meters in altitude to reach Deng village. A 40 minutes hike along the forested path will bring you to Salleri village, where you will get to witness two hydropower projects. The trail continues towards Sirdibas and crosses Philim to arrive at Chisapani village. After lunch, continue through the forested path towards Deng via Nyak and Pewa. Overnight in Deng.

Leaving Deng, the trail climbs downhill along the Budi Gandaki River. A short descent will bring you to the riverbanks. From here, you will begin climbing towards Rana Gaon and continue to hike through the lush pine forests that will bring you to Ghap. The trail further climbs up through the village of Suksum towards Namrung. The entire trek may last 5hr and covers 21km in the distance. Enjoy the majestic sight of Sringi Himal along the way. Overnight in Namrung village.

Enjoy the day exploring the beautiful Buddhist monasteries in the village. You’ll embark on an uphill trail and climb towards the charming village of Samagaon. Catch the beautiful sights of Ganesh Himal and Sringi Himal along the way. Walk past Lihi and descend towards the lower valley. The trail continues north towards Shyala village. You can consider visiting the local Ribung Gompa (Monastery) at Shyala village. Catch the beautiful sights of Himchuli and Peak 29 en route to Samagaon

The day offers acclimatization at Samagaon. You will use this essential day to make a beautiful and adventurous hike to Manaslu Base Camp (4460m). The trail goes past snow moraines and glaciated path towards the base camp that offers the majestic sight of Mt. Manaslu, the eighth highest mountain on Earth. Begin climbing over the rocky terrain and walk past snow moraines to arrive at the base camp. After spending some time, you’ll begin descending and head back to Samagaon village. Spend the evening exploring the beautiful Samagaon village and observing the local lifestyle and culture of the ethnic Sherpa and Tsumbas.

Leaving Samagaon, you’ll begin trekking towards Samdo village. The trail once again continues along the Budi Gandaki River. Climb the Larkya La trail and walk past the beautiful Mani walls towards Kermo Kharka. The Mani walls contain Buddhist graffiti and religious iconography. Leaving Kermo Kharka, the trail continues to drop towards the Budi Gandaki River and crosses to the other side to arrive at Samdo village. Samdo is a Tibetan village. You will find a large population of Tibetan refugees. Witness the vibrant Tibetan lifestyle, occupation, and culture in the village.

Leaving Samdo, the trail begins to drop towards the Budi Gandaki River. The path lies amidst lush pine and juniper forests. Cross the river and head towards Larkya Bazaar, a Buddhist settlement. The trail continues past Salka Khola towards Dharamsala village. Dharamsala, also known as Larke Phedi, lies an altitude of 4450m. Catch the magnificent sight of Larkya Glacier and spend the day acclimatizing. Overnight in Dharmasala.

On the hardest part of the day, you’ll leave Larke Phedi and begin climbing the mountainous pass of Larkya La that offers the breathtaking sights of some of the highest mountains in the region. Leaving Dharmasala, you’ll start climbing the glaciated path and climb to the snowcapped pass. Located at 5160 meters, Larkya La is generally covered with snow throughout the year. Catch the fantastic sight of Himlung Himal, Cheo Himal, Kanguru, and Annapurna II from the top. Afterward, you’ll begin climbing down along the glaciated path into the pine forests. The day ends at the Buddhist village of Bimthang.

Leaving Bimthang, you’ll begin climbing down the rock and ice into the forests. You’ll further descent along the Bimthang Glacier towards Hampuk village. You may witness many Yak pastures along the way. The latter part of the trek goes past natural oak and rhododendron forest before taking a sharp descent towards Goa village. Catch the beautiful sight of the oligotrophic lakes en route. Overnight in Goa.

Leaving Goa, you’ll begin descending towards Dharapani village. As you start to climb down, you will witness a broader community with a multi-ethnic population. The trail continues past Surki Khola and crosses the beautiful rhododendron forests towards Gho village. Catch the natural sights of Manaslu, Nadi Chuli, Annapurna II, and Himalchuli en route. The trail further drops towards Tilje and continues towards Dharapani. Once at Dharapani, you’ll enjoy a warm lunch and embark on a local jeep back to Besisahar.

Leaving Besisahar, you’ll embark on a bus and begin traveling back to Kathmandu. Bid farewell to the beautiful view of mountains and lush green forests as you continue driving along the Budi Gandaki River and Trishuli River towards Kathmandu. The half-day drive will bring you to Kathmandu. Check into your hotel.

On the last day, you can visit the nearby Thamel town to shop for a souvenir. We’ll drop you off at the airport at the time of your flight. In the meantime, you can consider exploring a few other tourist sites around the city.